If we could just have a repeat of last week then I will be more than ok with that. However I don’t think it’s going to be quite as ‘easy’ as it was last week, and I say that loosely just because we were able to catch $GS $NFLX $META (until Friday) & $TSLA to make for a nice week. The market also made the run up into the 4k whole number we were watching for and almost traded the 4026.75 level. Which I do think that level trades at some point over the next few weeks and it likely goes one of two ways.

Scenario #1 is that we pop up over the 4016s and trade the 4026.75 level as just a failure to go higher, and get an immediate reversal from that level similar to the action we saw on Friday.

Scenario #2 is that we manage to trade up into the level likely after we try to go a little lower and test under 3934.75 and we hold the level and can get a break from there up towards 4200.

At the moment these are some larger time frame outlooks based around that level.

FOMC & Earnings this week could throw a bit of a wrench in any plan so my main objective is to stay very nimble and not get married to any one direction here. In an ideal world 3934.75 holds this week on the first attempt and bulls can make a run at 4026.75 from there. However if that level fails then I’m going to be looking for weak shorts.

That is a total of 19 names at the moment who are normal names that I like during earnings season. There are about 5x that many set to report this week that I haven’t mentioned and I will be scanning for each morning, and just remember that it only takes 1 good earnings gap to make the entire week so no need to take sub par plays on the week.

$BABA & $BIDU at the moment are on the weak list. 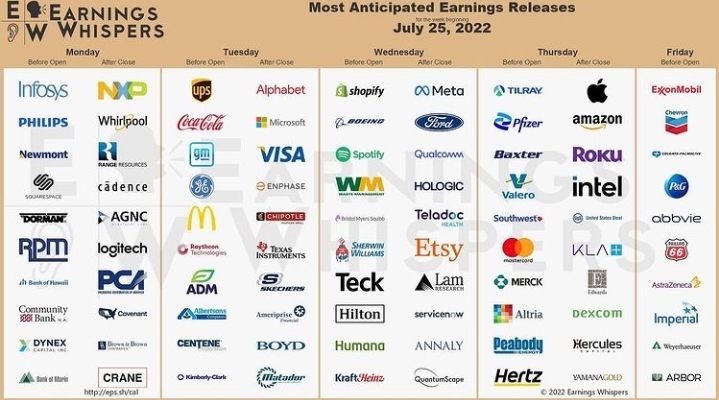