It’s Sunday night here and futures have been open for about 2 hours. A small pullback of 15 points to start the week after the ES managed to have a total range last week of 230.50 points is manageable. Let’s not just glance over the fact that we had a total range of 230.50 points last week in the ES with about 180 points of that coming after the FOMC announcement on Wednesday. Is there a little bit more upside with some decent earnings names this week or will we start to fade back into the range?

At this point we now have a daily chart that is 3 green bars to the upside, and could use a rest day or two. The weekly chart though looks like it wants to break the prior pivot and give us a push up into 4225.50. My LIS this week for longs will be 4096.50 and if we manage to get below that with confirmation closes then I will hold off on fresh longs until we set new pivots and a new trend is developed. An early morning Monday divergence off that level that sets the low for the week would be fun if it works out and would give roughly 130 points worth of target potential.

One thing I will say though about the move from last week is that for some reason we saw the ZB bonds rally when the Fed announced a rate hike. They have already taken out that weekly pivot that the overall markets are on the verge of potentially taking out. It doesn’t make sense at all that the market would rally on a rate hike at least from the way I think about it, but as I said last week and will say again right now…The charts are the only thing that matter. Price will do whatever price wants to do regardless of whether you ‘think’ it should be going up or down.

Earnings on the week that have my attention at the moment are:
$AMD $PYPL $CAT $UBER $ABNB $SBUX $AMC $DKNG $BABA

Carryover names that have my attention at the moment are:
$AAPL $AMZN $NFLX $TSLA

Let’s have a great week, and not make it any harder on ourselves then it has to be. 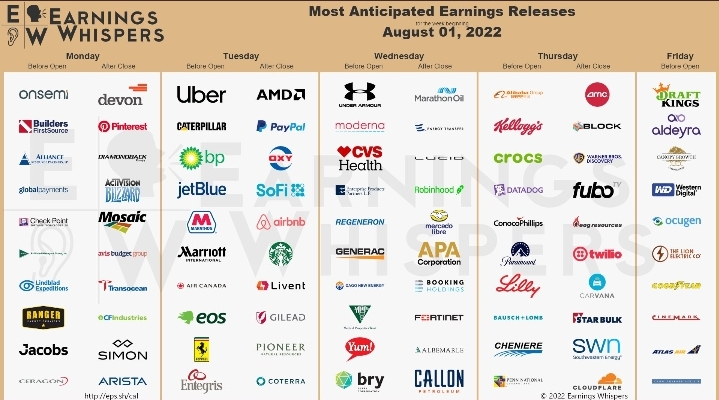